Quick trip to the South West

Any excuse to go back to England is a good one and the 60th birthday party / weekend from my friend Chris in Brixham (Devon) could not be missed.

Living in Hannover (Germany) it is always quite a challenge to decide how to get there.

The only direct flights are to Heathrow which as far as I am concerned is a disaster and believe me I know about it as I use to fly in and out of it many moons ago every single week and this for at least a year. The other alternative is Stansted and it is not a real alternative when you want to hit the South West (or anywhere except Norfolk really).

So no direct flights, but a good alternative Hannover – Amsterdam – Bristol (why we had to come back via Paris I will never know).

Anyway a short break / long weekend (Friday to Monday) is as good as a holiday and the prospect of seeing some old friends made it all worth it. Or was it the real ale I miss so much.

Anyway, we made in perfectly good time and the journey including the drive from Bristol to the English Riviera was very enjoyable.

The party itself was great.

Just like the ones we use to have. Pink Floyd, Beer etc.  In fact the beer ran out. Probably best actually. Maybe I should have called it a day then.

The next day was pretty foggy.

Managed to organize a bit of shopping in Dartmouth which involves taking a short ferry ride. 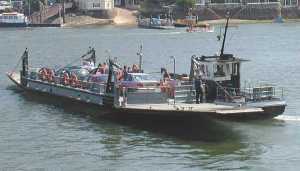 Good shop,expensive too, but I needed that jumper. It was cold and windy…

I particularly liked the advertising of that pub: 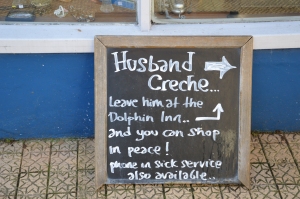 Stopped in Exeter on the way back to Bristol to look at the Cathedral and have a bite to eat. 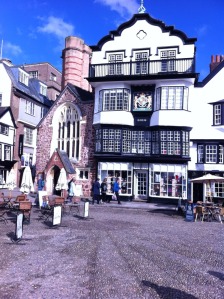 before catching the plane back home in Bristol and via Paris as mentioned earlier.