In my continuing effort to eliminate all Facebook products and apps, it is now WhatsApp’s turn to be deleted from my phone. The latest scandal about the spyware possibilities which I read about today accelerated my decision. I shall delete (if that is possible) all the chats and data I have and turn everything off in an hour or so. 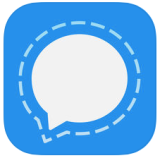 In the meantime I have changed my mind and will go for Signal instead of Telegram. It is open source and even more secure.

“While you’re happily chatting away on your phone or in your web browser, are you ever wondering what happens to all those 1s and 0s you’re sending into the digital ether?

Whether it’s a nosy national security apparatus or the guy sitting behind you at the coffee shop, there are people out there who want to peek at your messages—and some apps make this kind of snooping easier than others.

Enter Signal, the most secure messaging app you can get for your phone. Here’s what it is, why you’d want to use it, and how to get started.

Signal is a messaging app, just like WhatsApp or iMessage or Facebook Messenger, but one that’s geared towards privacy and security rather than cute emoji stickers. In fact, so good are its security measures that even Edward Snowden recommends it—and he should know which apps are the best for stopping unwanted snooping.

Signal is free to use and available for Android, iOS, and Chrome (a browser extension that links with your phone), and alongside the extra security protocols, it includes all of the basic messaging tools you’re going to need, including read receipts, emoji support, group chats, and voice and video calls.

As on WhatsApp, Signal uses your mobile number to identify you to your contacts, so there are no new usernames or passwords to remember, and you can dive straight in. On Android, you can also use Signal to send normal SMS and MMS messages to contacts who don’t have the app installed, but these messages won’t have the same security protections.

First and foremost, because it protects your chats. Anything you send or receive is encrypted, which makes it very hard for anyone who intercepts the data to work out what’s being said unless they are the specified recipient. What’s more, Signal doesn’t store any user data, so governments and other agencies can’t request it, and it can’t leak out.

On top of that, all the code is open source, which means anyone can look at how the app is written—that doesn’t mean hackers can break Signal’s encryption (which is virtually uncrackable), but it does mean security experts and users can check that Signal is maintaining the high privacy standards that it says it is.

Just about every security researcher that’s taken a look at Signal has given it a big thumbs up from a data privacy and security standpoint, and its underlying technologies are now used in a lot of other apps too. The FBI and CIA might not like it, but right now Signal is about as good as it gets for “going dark” on your phone.

How do you use Signal?

Signal isn’t difficult to use and the setup is the same as with many other messaging programs—all of that clever security technology is hidden away behind the scenes. When you’ve installed the app on your phone, you’ll be asked to enter and confirm your phone number. On Android, you’ll also be asked if you want to set the app as the default for normal text messages (Apple, of course, doesn’t let you change the default SMS app on iOS).

Tap the pen icon to start a conversation or select an existing thread to continue it. Icons to send messages, as well as make calls, attach files, share photos and embed voice clips all appear inside the conversation window, though there are some small differences between the Android and iOS apps.

You can set messages to automatically disappear on a contact-by-contact basis. On Android, open up the menu inside a conversation (the three vertical dots), tap Disappearing messages and set a time limit; on iOS, tap the banner at the top of the conversation to do the same thing. Bear in mind that conversations can still be captured via screenshot, though even this is blocked in the Android version of Signal.

Install the Chrome app in your Google-powered browser and the setup process presents you with a QR code that you need to scan using your phone, which should also have the Signal app installed. This links conversations and contacts between your phone and your browser, and keeps them in sync.”

This entry was posted in Computing, Social Media and tagged Facebook, Telegram, WhatsApp. Bookmark the permalink.