Day 68 in Carcassonne and 7th day of controlled de-confinement

Today marks the end of the second week of the controlled de-confinement and by the looks of it and despite a few trouble spots there are no major crisis to report. The number of hospitalised people and people in intensive care is gently diminishing in France. The figures for Occitanie and Aude are a bit disappointing despite the relatively small numbers. It however should be clear to everyone that the virus is still around and active. I guess we have to wait another week as originally announced for a new set of rules for the second controlled de-confinement period.

Surprisingly the day it is announced that tourists will be allowed back in Spain as of July 1st, the UK annouces a 14 days quarantine for all visitors (except the Irish). This closely followed by the annoucement by France that effective June 8th, visitors from the UK will also be subject to a 14 days quarantine.

In the meantime and despite the small relaxation of the rules, I am staying as much as possible at home.It is surely the safest place as I consider myself at risk due to age and historical medical conditions. But who cares, the pool is now 25ºC and going up and I have ample supplies of Rosé.

With all the money I saved by not going out for lunches or diners, I have ordered myself a brand new Apple iPad Pro to replace my Hong Kong bought 10 years old one. It still works despite the fact that no updates or new apps have been available for the past 5 years. Something must be done about software obsolecence. Maybe it is a fight I should get involved in.

Anyway, the sun is back so we can all enjoy a warm and lazy Sunday. 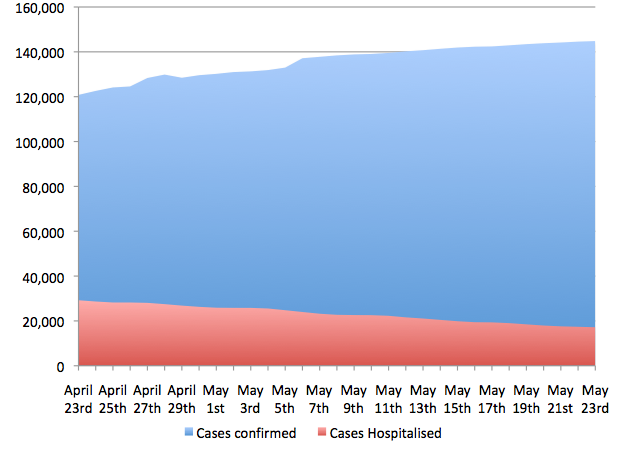 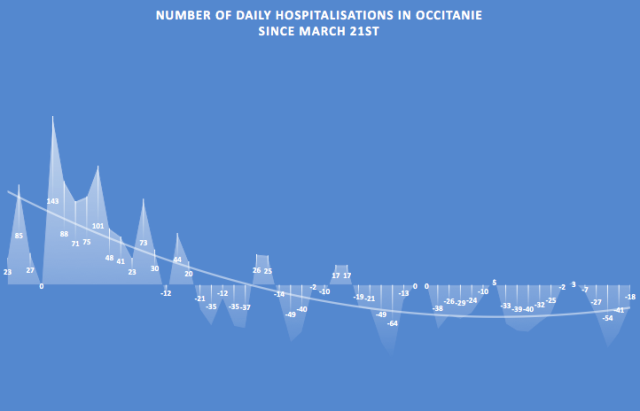 Data will no longer be published by ARS Occitanie (Agence Regionale de Santé) on a daily basis but only twice a week.

It has been announced that the data regarding deaths will be “re-evaluated” on Monday. Not sure why but I doubt it will be for the better. In the meantime the death in retirement homes has not been reported for the past 2 days.

After two months of closure due to the coronavirus pandemic, the tourist sites in the Aude are gradually reopening their doors to the public, applying the health measures required by the authorities.

1937: the Palais de la découverte opens its doors as part of the Paris International Exhibition.

1964: 320 spectators were killed and 1,000 injured during a Peru-Argentina match in Lima as a result of crowd movement in the stands.

1979 : in Cannes, the Palme d’Or is awarded to Francis Ford Coppola for “Apocalypse now” and Volker Schlöndorff for “The Drum”.

2014: A man opens fire in the Jewish Museum in Brussels killing four people. 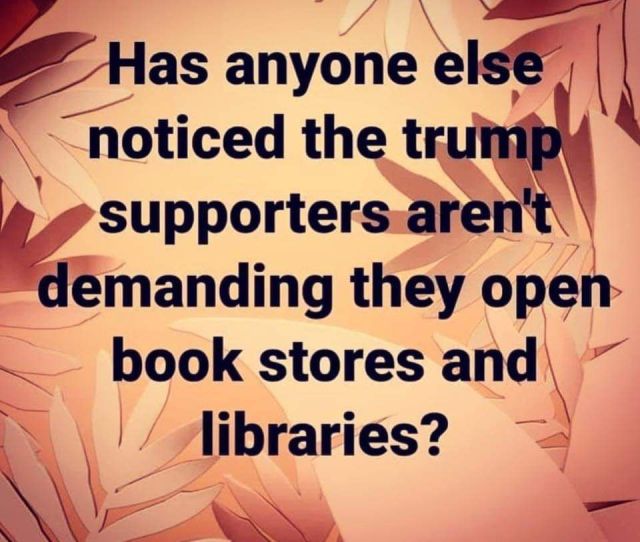 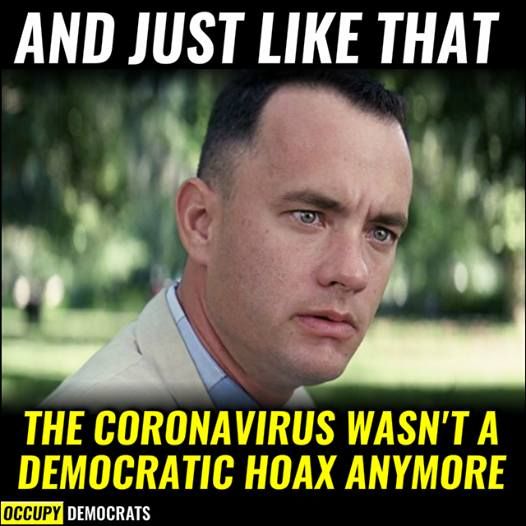 On the official database, the current day’s data  is updated approximately every hour and the current day fills up as the figures are announced in each country. More info on: https://coronavirus.politologue.com/ 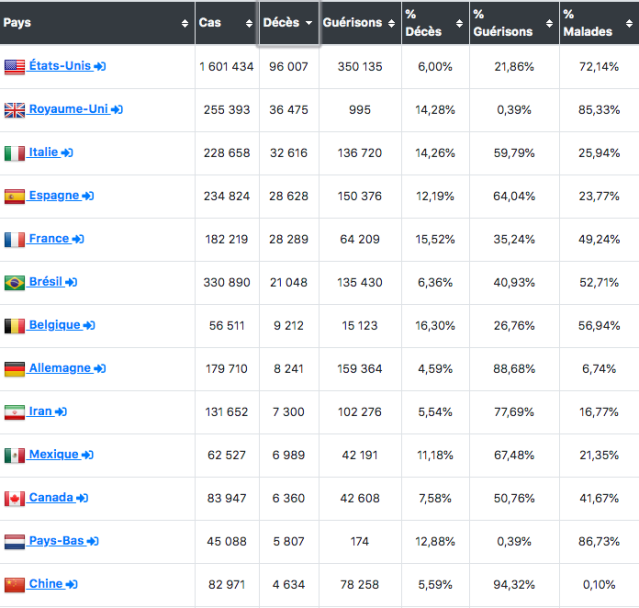 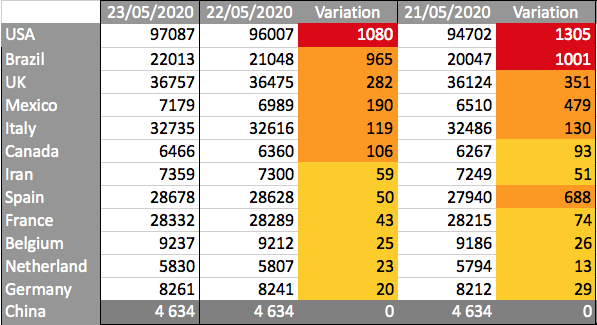 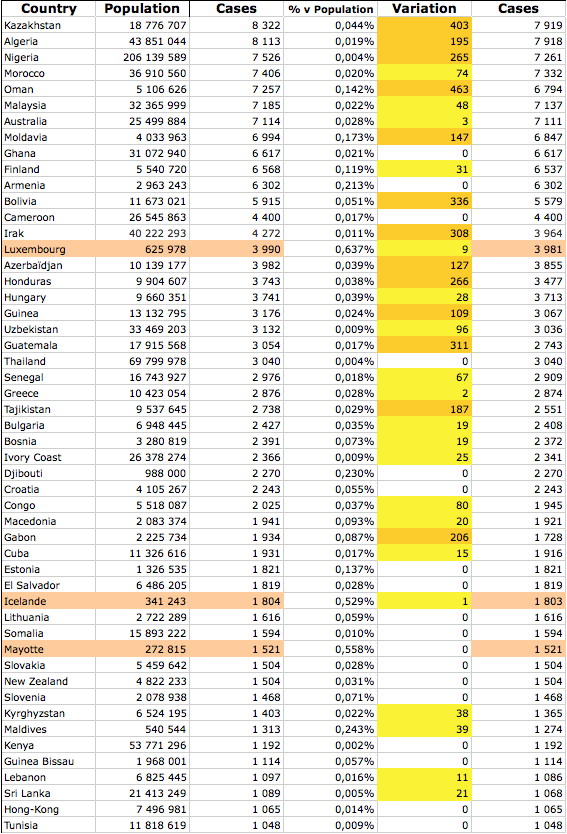 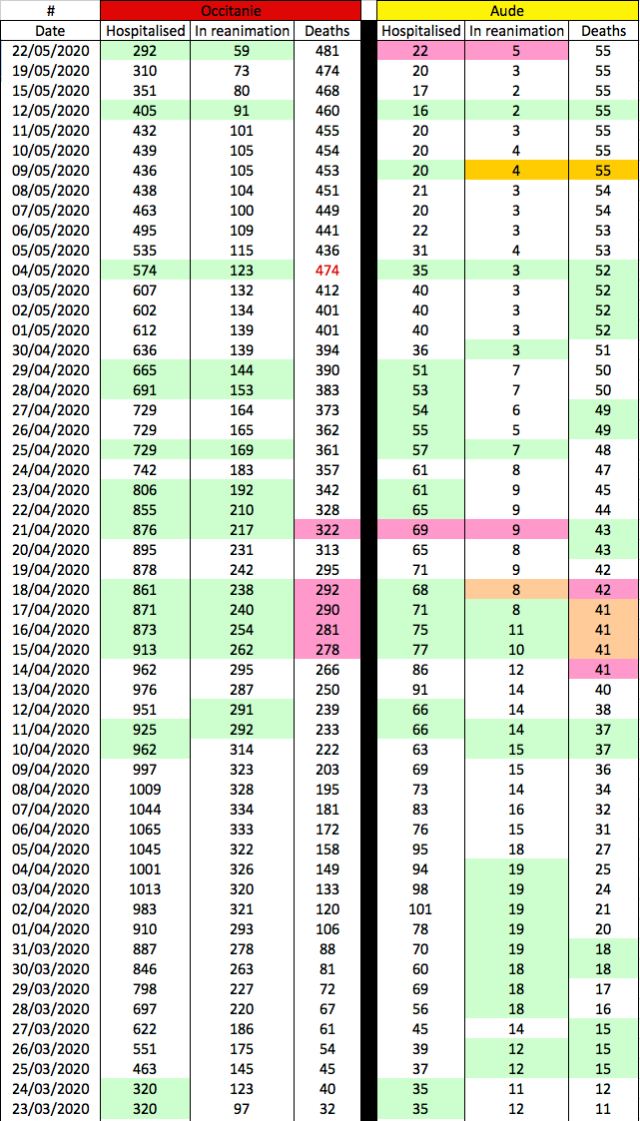 Data will no longer be published by ARS Occitanie (Agence Regionale de Santé) on a daily basis but only twice a week.